Considering that I haven't updated anything about Christopher in FOUR years, things will be really big here! Christopher has done so much in the last few years that in some ways he seems like a completely different kiddo. In other ways he is still very much the same!

First and foremost, Christopher speaks. He can't necessarily carry on a conversation with you if you are not interested in what he wants to talk about, but he can and does definitely verbalize things. I would say that for necessary communication we're at about an 80% give or take. When he is really upset/bothered by something he cannot always tell you what is going on. For instance, he really doesn't like the bells being used during the consecration at daily Mass. Instead of saying something like "I don't like the bells" or even "no bells" for a while he would say "punch/kick/hit Olivia" who is one of our friends' daughters and she is really a great kiddo who was altar serving at daily Mass for a bit. He really likes Olivia, she's one of his favorite friends, but he couldn't figure out how to articulate that the bells were bothering him so instead he blamed the person who was making the noise.

Something else that has been amazing is to see how he is with Benedict. We were really worried about how he would handle a crying baby, something that we couldn't control the sound with. But, it was actually not something to be too worried about; initially he was really upset but then we just put Benedict in his lap and suddenly he was "Christopher's baby" and Christopher was holding him often. Funny thing though, he had to pull his pant legs up! 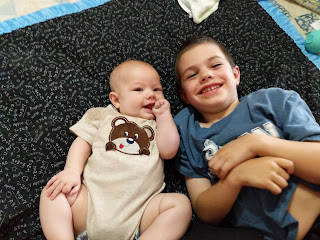 And then we have him and Dominic. They have moved into a really typical brother relationship which is super cool and super annoying simultaneously. Most often if he's annoyed with Dominic it's for pretty normal reasons and he reacts in that normal way. Interestingly, when we were going through the really rough stage with Christopher, Dominic could sense when it was an autistic meltdown and would just sit there and take it. Now we have to remind him when Christopher is having a hard time because he's autistic and when he's just being a bratty little brother. But they are still best friends and do really play together these days! 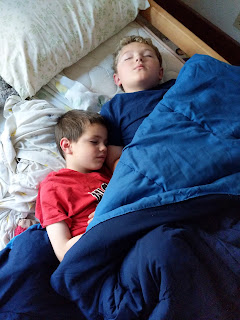 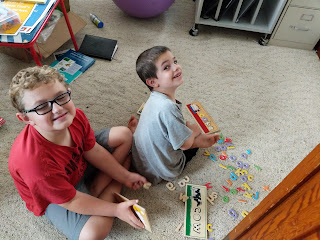 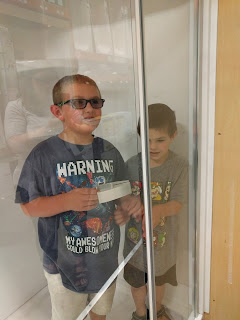 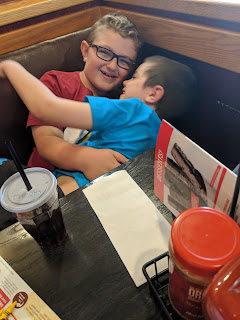 Currently we don't have Christopher in any therapies, I took a course called More Than Words with his speech therapist that got him his "talker" or communication device. It was amazing and I'm actually planning on doing a refresher course and going through some of the lessons to work on specific things that he's struggling with. We attempted to restart OT and Speech when Benedict was about 4 months old but it was just too hard for me because it was an hour away. And, with his progress it seemed to be more than what we needed at the time. Speaking of his communication device, he still uses it, but it's often to learn new words or work on sentences. He's started using the keyboard to type out the words if they aren't in his dictionary on there. Because, OH YEAH HE CAN READ!!! That came as a shock as we'd never worked with him on it specifically but suddenly we realized he was reading signs. He can read all the words to me when he does his phonics in school as well as reading his spelling words. Seton helped us to set up a modified course for him with different courses than what Dominic used when that seemed appropriate. Primarily English and Math right now. We are having him sit in on Dominic's religion lesson and then we were gifted a set of these 1st Reconciliation and 1st Communion sets by Beth Anne. It was an amazing thing and he can often be talked to about his behavior with words from the 1st Reconciliation kit including "is this a bad choice?" Which he will often reply to with "No bad choice Christopher! Sad Jesus!" while sobbing, and really, does it get more pure than that?

All in all Christopher has made really awesome progress. He even does things sometimes specifically to get a reaction from you and joke/play with you. Of course, then it becomes a script and deviation is not allowed, but you know...baby steps! 😁
Posted by Jeanine Spano at 2:20 PM