So, yesterday we went for another speech appointment to see if Dominic would participate for an evaluation. He was still pretty stubborn not wanting to participate, but the SLP finally found something that would get him to participate. She had an app on her iPad that had a puppet and when she spoke into the mike, the puppet repeated what she said. Dominic thought this was great and he communicated more than he had at all in the past. It's so strange, he is usually so chatty, even with strangers, but with her he hardly expressed his vocabulary at all.

She felt like he is right on target on some areas, that he is a little behind in others, and that there are some things that are just starting to emerge. So, she gave me a bunch of recommendations and suggested I get back with her in a few months just to check in and see how he's doing. Surprisingly, Christopher tried to play with her a bit, and he was doing a puzzle. He did pretty well with it too, he really likes puzzles. He gets speech twice a week and she said that if we wanted him to have more that we can take him there. I don't know that we will, because he's got some rapport with his current developmental aide.

One of the suggestions she gave, and my friend Krista made the same suggestion, was to institute a bit more routine in our lives. I'm trying to do that, but also continue with our laid back approach to parenting. It's a difficult combination, but I think once we get into the swing of things we'll have it down. :)

This morning we went to the store and then I took the boys to the park, we had the place to ourselves and we really had a lot of fun running and chasing eachother and hopping. 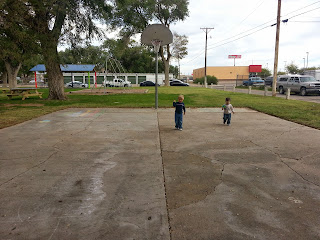 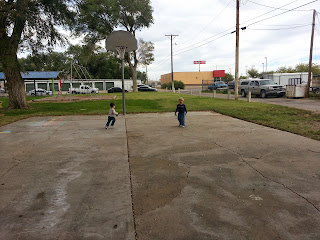 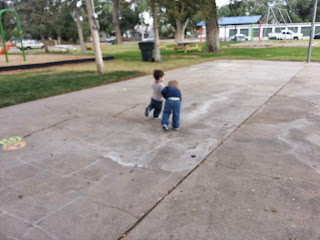 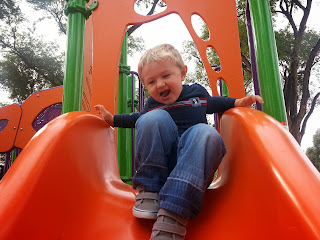 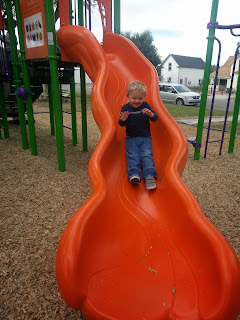