Linking up this week with Cari who is covering for Jen!

So Christopher has speech therapy twice a week, but normally it's a developmental aide (I think that's what they're called) that comes in and then once a month the Speech Language Pathologist (SLP) comes in to see him. Well this week was the week the SLP came and she gave us some idea towards what is causing his issues. She thinks he might have speech apraxia. If you read that link, it is almost everything that Christopher does with regards to his speech. So she gave us some tips to help him out. But, she also caught some things that are red flags, that might lead us to a more serious diagnosis.

If you read Cam's blog, you might know the journey that she is going through with her youngest daughter, Mae. As she was documenting some of the things she noticed about Mae, I also saw some things that Christopher does that are similar. We are going to see a developmental pediatrician who might come back with a diagnosis with Christopher on the autism spectrum. But, it might not. I'm trying really hard not to stress about it because it could just be the speech apraxia and the things we are going to do to help with that developmental issue might take care of everything. I won't lie, I feel stressed and overwhelmed and unbelievably guilty. It is so easy to look at something and say it must be me, or something that I'm doing wrong; but after talking to a few friends I feel better about that. I know that diagnoses like these come to all different families with different parenting techniques.

That being said, there are some things that we don't currently do that we are going to work on implementing. We have maintained a really laid back parenting style with no real routine/schedules. So, we are going to be working on a much stricter schedule as the SLP thinks that this will really help him out. I think it will also help Dominic too, even though he just tends to create his own routine, this might help him feel a little better about things. I'm going to take pictures of things that he regularly eats at our house and create a flip book to help with his communication too. The picture with the word should help a lot. We will also be creating a picture schedule so that he knows what we will be doing throughout the day, but this probably won't make much difference for a while. But I think I will make one for Dominic too so that he can see it and knows what to expect more too. We are putting Christopher back in his high chair for meals and so far that has been helping a lot. He's been eating a lot more and he hasn't cried at all when he's been in there. It just makes me see how much structure this kid needs to function well.

Whew, that was a lot of deepness...it's time for some frivolity! 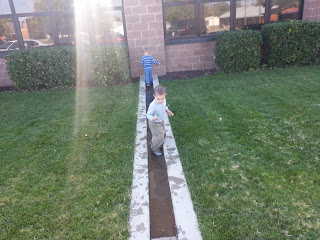 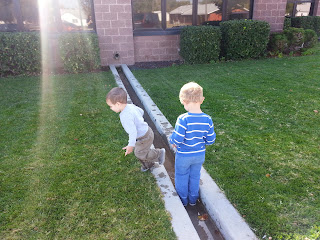 The boys and I went for a walk to the library and then the store, but they got tired on the way home and we stopped at the community building to "rest" but the boys found some water. Of course.

I haven't updated much on my weight loss lately, and I plan to do more soon, but for now I just wanted a brief update. I'm kind of stuck in a plateau right now that seems to be around 258.5-262. I'm not sure why, it might be a female/hormonal thing, because it feels like my measurements are always done right in the middle of a cycle; but I might need to pump up my exercising. I hope to figure it out soon. :)

Meanwhile, Jason has been doing the diet with me and he seems to have better luck than I do! He's dropped about 7 pounds already. Impressive since he's been so crazy at work and hasn't done his regular workouts. Of course, he does ride 3+ miles a day on his bike...

I can't think of anything else...so instead here is this video of Dominic. He has been enjoying watching this several times and he giggles at himself the whole time! 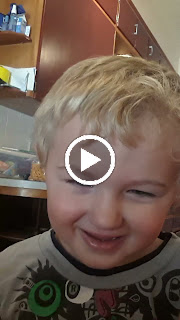 Posted by Jeanine Spano at 1:54 PM