I wanted to chat about where the boys are with school. Last year we actually took about 18 weeks off during my bed rest. Even though Jason moved a desk into the bedroom and would bring the school books in so I could plan, just sitting that much upright was too hard for me. So they didn't get much of vacation for the summer, I think we took a month off or something. So we have Dominic in 2nd grade this year and Christopher in 1st grade. 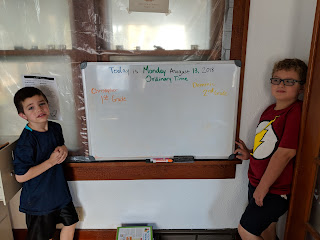 As you can see a little in this picture and a little bit more in the next, I use the wipe off board to use as a calendar. I write the day and the Litrugical time of year. I think that's super cool, and gets them used to it. We start the school day off with Dominic reading the day and then we say a prayer. 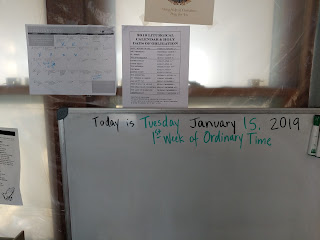 Beth Anne has that printable Liturgical calendar available on her website, I recommend you head over and check it out. She also gave me a link to print out the calendar like what we get from the church. That's nice because we can keep it easy to read and up close.

After praying together, we have a few lessons we do together. We do an art lesson once a week, it's slightly painful because the boys are not art kids. They don't like drawing or coloring or anything like that. Also, I am a terrible artist. 😐 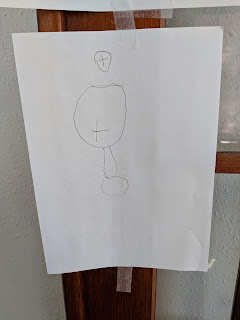 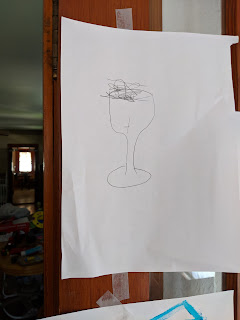 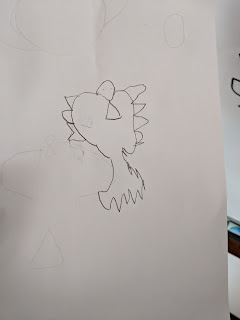 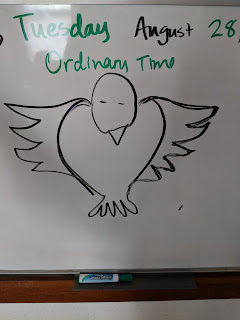 I've been impressed with the change in Dominic, from not wanting to do it at all to being willing to at least TRY, which is all that I ask of him. The one on the board is mine, and then the one with the chalice that is very clear is what I started for Christopher then he added the rest.

Religion is mostly just Christopher barely listening, but Dominic is really engaged. The 2nd grade book is set up very cool because it's like the lesson with a few questions to reiterate things. Then the next day it repeats the prior days lesson in a super short version, and adds to it. There are 4 days of lessons with Fridays free or for review.

Then Christopher has Phonics/Reading, Language Arts, Math, Spelling, and Social Studies. With his special needs counselor we added Handwriting Without Tears which might work for some kids, but for some reason it is a serious misnomer for us. So instead I have done a combination of printing out some handwriting sheets as well as using his spelling for writing.

Dominic's list of lessons is a bit longer; he has English, Phonics, Reading, Handwriting, Math, Science/History (every other week), and Spelling. Sometimes I even feel like a real teacher with writing on the board and things. 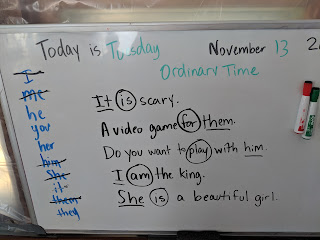 It's been super fun to see what the boys are good at and what they enjoy. For example, usually for Christopher's spelling tests, he will just tell me the spelling. I mean, sure, he's saying something like "no S no A no T" but he still spelled 'sat' so it's a win. But last week...last week he wanted to spell the words with writing them himself. 😭 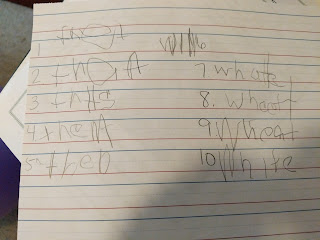 He needed help with writing the 'e' and he has a weird habit right now of turning letters into 'H'. So like you can see on number 3 it was  'this' but after writing it he changed the 'i' into an 'H'. He's silly. Number 6 was 'wine' and he did that without any help at all. It was just such a huge change from anything before.

One other thing that I really love about Seton is that there is religion in everything. Here is some of Dominic's English which is actually the best example. He was learning adjectives, but it tells the story of Tarcisius. He's also learned about Joan of Arc, and most recently St. Bruno. And that's just because of assignments with a story throughout each assignment. 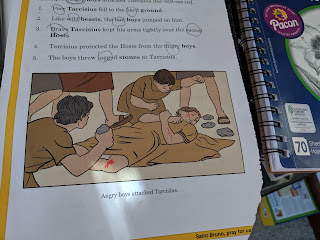 All in all our lessons seem to be going well and I'm excited to continue on!
Posted by Jeanine Spano at 3:46 PM