Christopher did really well in speech therapy yesterday. He made eye contact various times throughout his appointment and he even made some different sounds. Like, he was trying to mimic the therapist. It was great! Today, when Jason's mom came over to visit she brought him part of his book that he had left at their house and he kept coming over and touching her with it. It was really cute!

The therapist made some more suggestions for things to do for Christopher. One of the things she suggested is that he might be getting over stimulated by so many different things to play with and suggested putting away some toys. I put up 3 bins of toys and left out some of the things the boys play with the most frequently. He seemed excited by all the room in the playroom anyway.

I made an attempt at putting Dominic in underwear today with a couple trips to the potty. I'll let you guess how that went.


--- 4 ---
I was thinking that I wasn't going to do naps this for the boys today because they've been sleeping pretty poorly lately. But the boys had different plans... 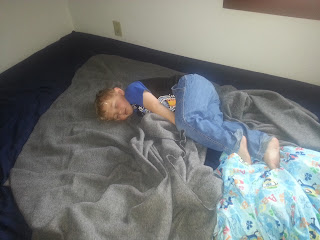 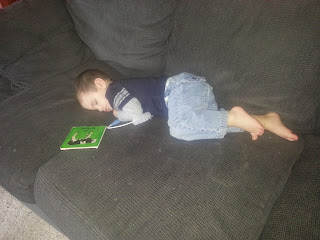 I mentioned yesterday about my workout routine, I've been really enjoying the water aerobics this week. But let me tell you, that is HARD. I was so sore yesterday morning that I couldn't get up for my cardio. Yikes. And this is done in a therapy pool, so it is very warm and I am always sweating at the end of running laps.

A friend of mine sent me a text message today asking me to pray for her friend's daughter who is spending some time in Children's hospital because she has developed Stevens-Johnson syndrome. If you've never heard of it, don't worry, I hadn't either. She had bronchitis and was given an antibiotic, and she had this severe reaction to it. She was told at their local hospital that they thought it was chicken pox (in her mouth) and sent her home. The poor girl has been put on a feeding tube and already undergone surgery. Please pray for her and her family. There are 6 little ones and now another kiddo has bronchitis.