Jason bought a new Surface that came with Windows 8 and the new Office. Because he works on computers and teaches Windows programs he has to have hands on knowledge of the equipment. I have to say it's pretty nice, I'm not using it right now, but I've used it a few times and I like it. It works as a tablet and you can connect the keyboard, it is basically a laptop. It uses the full operating system not just a tablet OS. My biggest complaint is that Google isn't going to support any Windows tablets :( so using some of my favorite Google apps is a pain.

Christopher's Speech Therapy seems to be going well, except that he seems to be getting even more frustrated with his lack of communication. The past few days he's been pinching and biting a ton when I can't figure out what he wants. I'm seriously anxious about getting this stupid hearing test done so we can figure out if he's hearing us well enough.

What time do your toddlers take naps? I'm pushing for late morning, early afternoon because otherwise they are up so late and I just can't take it. Also, do you ever wake them up? I've always left sleeping babies alone, but I'm starting to think maybe I should only let them nap an hour or so. What do you think? Begging for trouble?

Lately Dominic hasn't been too interested in eating when we sit down at the table. But, I've found that if we sit at the table with his food in front of him for a while (he might get up and run around or something), he will eventually pick up whatever it was we were eating and finish almost all of his food. He ate 3 whole pancakes this morning, which is a big deal around here lately.

I discussed with my trainer this week what my biggest struggle with eating appropriately is. When I'm trying to get snacks or food for the boys, I have something in my mouth before I even realize it. She suggested chewing gum throughout the whole day, so that I can stop to think about it before sticking something in my mouth. And also suggested getting the boys' snacks made up ahead of time so that I don't have to worry about it at the time.

I'm going to try to get my mom to the water aerobics class. She's so scared of water, but she has weight problems, circulation problems, and some neuropathy so I really think that doing some water aerobics will be the best for her. We made the attempt twice this week, but couldn't get our act together. Next week hopefully!

Our Friday night meal has become soft pretzels. It is so yummy! Not that I'm getting to eat it lately of course...it is definitely not a part of my regularly scheduled diet. 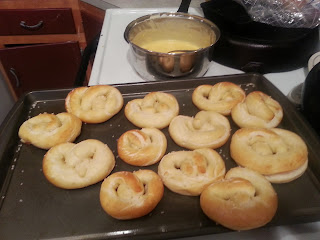